To leave a comment or stay informed of the latest French news, subscribe to Lumisoft's Facebook page. You will find on this page the main information to remember about Metatogger, in English.

Metatogger available on the Microsoft Store

Metatogger is now available on the Windows Microsoft Store, making it easy to discover, download and install. But Metatogger remains a Win32 desktop application and its updates and uninstallation will continue to be done in the traditional way, i.e. independently from the Windows application store.

Metatogger version 7.1 was released today. The main new feature of this version is the support of the Opus file format which is the natural successor of the Vorbis codec. Also, Metatogger binaries are now electronically signed, guaranteeing their authenticity and integrity.

Metatogger version 7.0.2 was released today. The main new feature of this minor version is the use of the Windows 10 audio playback engine, which is more stable and reliable than the one used until now. The drawback is that users who have not yet migrated to Windows 10 will no longer be able to use this feature. I remind you that the support of Windows 7 by Microsoft ended on January 14, 2020.

Version 7.0.1 of Metatogger was released today. The main new feature of this minor version is the tool for removing unwanted tags, whose interface has been completely redesigned. From now on, you just have to click on the tags to delete, without having to type them. The scope of the cleanup becomes much more predictable.

Version 7.0 of Metatogger was released today. The new features of this major version are mainly technical, linked to the use of the .NET 5.0 framework, now embedded in the software itself (it is no longer necessary to install it beforehand on the machine). Metatogger is now a 64 bits software, which should considerably limit memory problems. Gains in performance and reliability are also expected.

In this version, hidden items in the workspace because filtered are not affected by the tag manipulation tools. It is possible to modify this behavior by setting to false the ProtectFilteredItems parameter in the advanced settings file.

As expected, the lyrics search doesn't work anymore. With no viable alternative, I was forced to remove this feature.

Closing of the LyricWiki lyrics site

The LyricWiki site announces its closure for September 21, 2020. After this date, the retrieval of song lyrics in Metatogger might not work anymore. Unfortunately, I don't know any alternative sites offering a similar service (free access to lyrics with an API). Probably the end of an era... 😔

Taking into account changes made to audio files outside of Metatogger

First feature in 2020: changes made on audio files outside the software will be reflected in real time in Metatogger.

A preview of the future dark theme I'm working on. 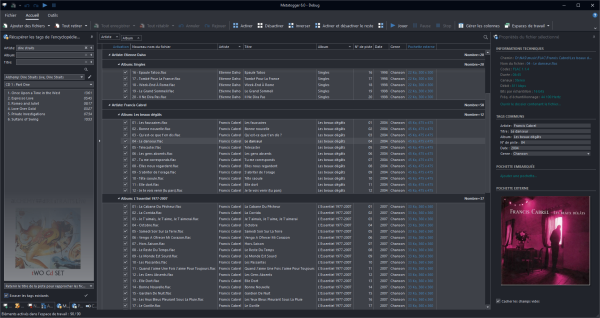 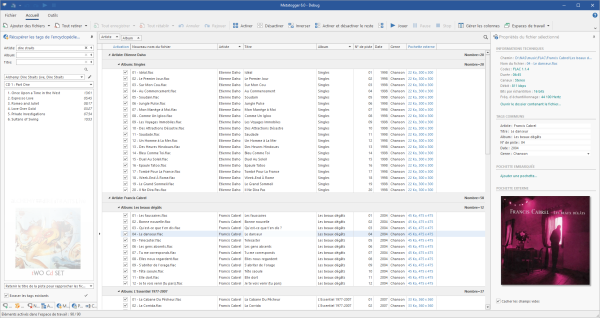 Metatogger now has a script to transliterate Cyrillic characters into Latin characters (and vice versa).

Easily reduce the size of your embedded covers

Metatogger 6.0 has been released with a slightly redesigned interface and a new feature to reduce the size of embedded covers. And as always, many bugs fixed.

Most of the scripts in Metatogger have been updated to allow the user to easily indicate which tags the scripts should act on.

Metatogger 5.9.1, released today, contains a new audio playback engine that allows you to move forward or backward in playback by moving the slider provided for this purpose in the status bar.

You can now detach, anchor, move, resize the software's tool windows to your liking.

New script to correct the case of English tags

This new script allows you to correct the case of English titles; it capitalizes the first letter of the principal words.

Metatogger is now available in Russian, German, Spanish and Italian.

The next version of Metatogger will support long paths (more than 259 characters) under Windows 10 version 14393 (the "anniversary" update).

In addition to the usual bug fixes and performance optimizations, it is now possible to modify some advanced settings in the software, such as the ID3v2 standard to be used to save the tags of MP3 files.

Metatogger 5.6 will use C# scripts, which by default will be hosted on GitHub, in order to facilitate their sharing and updating.

Metatogger 5.5 is released! The software now relies on TagLib to read and write tags of audio files (including M4A files, in AAC format). "Uncommon" tags are now more common and useful than before.

Here are the main new features and improvements of Metatogger 5.3:

Here are the main new features and improvements of Metatogger 5.1:

Moreover, this version requires version 4.5 of the .NET Framework, not supported in Windows XP, operating system released 12 years ago.

For your information, here are the main new features and improvements of Metatogger 5.0: