You will find below the Echosync documentation, in the form of frequently asked questions.

Need some help? Before requesting technical support, please make sure that the answer to your question is not already on this page. If you wish to report a bug, please follow the recommendations in this article: How to report a bug efficiently?

Technical support is provided free of charge, by the author of Echosync, on his free time. If you want to thank him for his service, you can make a donation via PayPal.

What are the limits and constraints of Echosync?

Echosync has the following limits and constraints:

In which languages is Echosync available?

Echosync is available in English, French, Italian, Spanish, German, Chinese, Dutch and Russian. By default, Echosync starts in the language of Windows if it is available, and in English if not. The language used can be changed at will in the software options, accessible from the Options menu.

Adding an additional language in Echosync is very easy and does not require recompiling the software. Translation candidates are invited to contact the technical support. Thanks to its volunteer users, Echosync is also available in Italian, Spanish, German, Chinese, Dutch and Russian.

How to use and update the portable version of Echosync?

To use Echosync in portable mode, just unzip the Echosync archive to the location of your choice (like a USB key), avoiding choosing a folder that requires administrator privileges to write to (like the Program Files folder).

Echosync comes with a PowerShell script for automatic updates. During the update, the old folder is renamed. You can safely delete it after making sure that the new version is fully functional.

How to create a synchronization profile?

Echosync displays the list of loaded profiles, with for each of them, their name, source and destination directory, the date of their last synchronization, their status and a free description given by the user. The name and description of the profile can be modified at any time.

Where are the synchronization profiles stored?

The synchronization profiles are stored in a XML file, named as the machine that created it, with an XBP extension (XML Backup Profiles). This file is stored in the Profiles subdirectory of the application (in portable mode) or in the %LOCALAPPDATA%\Echosync\Profiles folder (if Echosync is installed on the machine).

The synchronization profiles are associated with the name of the machine that created them. In other words, only the profiles corresponding to the machine running the software are displayed. As Echosync can be used in portable mode (e.g. directly from the destination media itself), it was necessary to manage the case of profiles created on separate PCs.

How to delete the synchronization profiles?

Selected profiles (Ctrl+click for a non-contiguous multiple selection, and Shift+click for interval selection) can be deleted by clicking on the Delete link.

Deleting a synchronization profile does not delete any files.

How to exclude some subfolders of the source folder from synchronization?

It is possible to exclude some subfolders contained in the source folder from synchronization. To do so, it is necessary to edit the XML file in which the profiles are saved. You can then add each subfolder to be ignored during synchronization by adding it to the XML tag SourceFoldersExclusion of the corresponding profile, as follows:

How to make partial synchronization?

How to synchronize from or to a folder on a smartphone?

The easiest way to access the memory (internal or memory card) of a smartphone is to "mount" it on the computer in UMS mode (USB mass storage device class). Thus, access to the smartphone's memory is done in the same way as any other drive such as a USB key, either with the Windows file explorer or Echosync.

Unfortunately, the UMS mode is less and less available on recent smartphones, in favor of the much more limited MTP mode (Media Transfer Protocol): access to media files only, no mount point for universal and standard access, etc. So you'll have to find a way to access more freely to the smartphone files.

One possible solution is to use the WebDAV protocol to access the smartphone files. This requires to connect the smartphone on the same network as the computer running Echosync. The smartphone must therefore be connected to your local network via WiFi. Then, you need to use a WebDAV server on the smartphone. You can find several of them on mobile application stores.

Under Android, for example, you can use the WebDAV Server app available on the Google Play Store. Once the app is launched and the WebDAV server is initialized, please note the file server address. 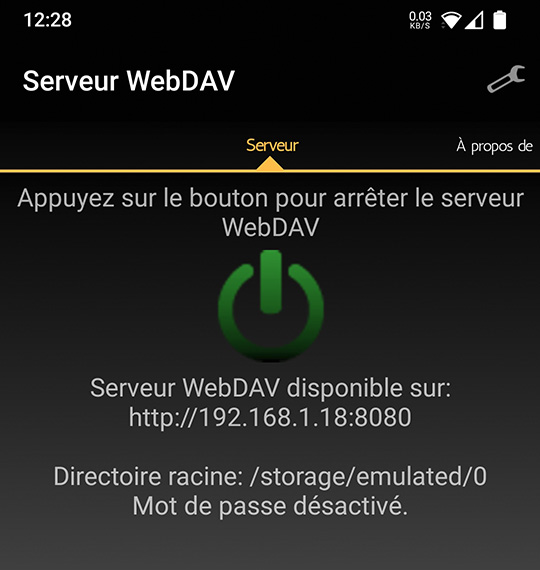 In this example, the server is available at http://192.168.1.18:8080. To access this file server from a Windows application, rewrite the URL as \\[IP_ADDRESS]@[PORT]\DavWWWRoot, in this case \\192.168.1.18@8080\DavWWWRoot. It is enough to complete the path with the name of the folders and sub-folders composing the targeted tree, for example, \\192.168.1.18@8080\DavWWWRoot\DCIM\Camera to access the files and sub-folders contained in the DCIM\Camera folder. The full path can be used in Windows File Explorer or Echosync, as a source or destination folder.

What kind of difference does Echosync detect?

By default, Echosync ignores files with the system attribute. It is possible to include these files by setting the IgnoreSystemFiles parameter to false in the AdvancedSettings.json configuration file, located in the Profiles subdirectory of the application.

Why are my files identified as different when they have not been modified?

Echosync relies on file modification dates to identify files that need to be updated. However, not all file systems have the same accuracy in time stamping and rounding beyond the second can occur when copying files.

This table illustrates this principle with some examples:

While Echosync ignores millisecond differences by default, a difference of one second or more is considered a potential change. Therefore, it is recommended to avoid synchronizing folders between NTFS and FAT drives. FAT file systems that are intended to be used only under Windows will be conveniently converted or reformatted to the more efficient NTFS.

How to program the synchronizations?

Echosync does not have its own programmer. This would have implied to have a resident program in memory at all times to trigger the synchronizations, increasing the memory consumption and the machine startup time.

It is possible to start Echosync in the so-called "silent" mode. This mode hides the splash screen and automatically reduces the program window in the taskbar. To do this, just pass the /silent argument on the command line.

It is also possible to define the Echosync behavior at the end of the synchronization operations.

How to compare two folders without starting a synchronization?

A Compare button is used to launch the comparison between the source and destination directories of the selected profiles.

The Pause and Cancel buttons, which appear to the left of the Compare button, respectively pause or stop the comparison operation.

The result of the comparison is immediately presented to the user by displaying a future view of the destination directory.

A click on the Synchronize button launches the synchronization of the selected profiles, carried out as soon as the comparison is performed.

The progress of the synchronization is displayed in the status of the profile, and if it is selected, in the Windows taskbar.

The Pause and Cancel buttons, which appear to the left of the Compare button, are used to pause or stop the synchronization operation respectively.

How to detect synchronization errors?

The Status column of the comparison report mentions, if necessary, the reason why the synchronization of an item could not be successfully completed.

Can we launch the synchronization or the comparison of several profiles simultaneously?

If several profiles are selected when the Compare or Synchronize command is launched, the operations are performed sequentially. The status of the profiles mentions the delayed start of a comparison or synchronization operation.

A simultaneous start of operations can be forced by explicitly starting the desired operation for each profile. This is beneficial in terms of performance only in very rare circumstances. Indeed, there is no point in launching several synchronizations simultaneously if the maximum read/write rate of the storage medium used is reached or if the bandwidth of the connection used (USB 2 in particular) is saturated.

How to program the automatic shutdown of the PC or the closing of Echosync at the end of the synchronization operations?

The Options menu allows you to choose an action to be performed once the synchronization operations are completed: shut down the computer, put it in hibernation or close Echosync (unconditionally or only if no error occurred during synchronization).

The automatic shutdown of the PC, the hibernation of the PC or the closing of Echosync can also be programmed from the start of the software by adding respectively the argument /shutdown, /hibernate, /exit or /exitonsuccess to the command line.